Bees and the Christmas almond feast As I prepared the almonds for the Christmas cake I thought about the busy bees buzzing into each of the almond flowers and the almond industry. At Christmas time I imagine how many people around the world are enjoying almonds for all their special treats. Only the bees pollinate almonds, so their optimum health is vital for almond production.

The bees are trucked vast distances over eastern Australia for the August month long pollination of the almond orchards in the Riverland, Sunraysia and the Riverina. Apparently some beekeepers send their bees away to other areas rich in pollen to strengthen them prior to the almond pollination as they do not produce honey whilst pollinating the fruit trees and there is no other source of food for them. The almond trees are also sprayed with a mix of pesticides which could be harmful to bees. (Look out for the ‘insecticide free’ almonds from Health Food shops). Only five commercial beekeepers are local with around 1,500 hives in  total,  so most bees have to be trucked in from elsewhere. 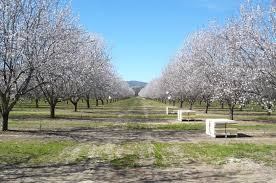 This region produces 19% of Australia’s almonds with 5,568 hectares of almonds under cultivation. The Sunrasia region has 19,417 hectares of almond trees which takes around 110,000 bee hives to pollinate (in 2012) Most from NSW, 4,000 from Queensland and a small number from South Australia. There’s a very informative pamphlet on Australian almond pollination and production by the Rural Industries Research and Development Corporation if you’re interested in learning more.

The film ‘Queen of the Sun’ shows how the almond industry in the USA is affecting the bees with its immense areas of monoculture and bees even needing to be imported from Australia to pollinate the blossoms as there just aren’t enough bees in America.

What a lot of work goes into the almonds….

ACT for Bees Autumn 2021 Buzzz- A focus on Trees