What’s the problem with using pesticides?

“The world’s honey bees have been in steep decline for over a decade, with extraordinary losses in population witnessed across the globe resulting in a 30 percent loss of some honey bee colonies every year. Beekeepers across the U.S. and Europe have reported these mass bee deaths, known as ‘colony collapse’ since 2006 and in the absence of any singular explanation, the disturbing decline was dubbed ‘Colony Collapse Disorder‘ or CCD.Native bee populations have fallen by an estimated 40 to 50 percent globally, according to Hogendoorn and she said that there is every indication the same trend is happening in Australia.”We’ve got 1700 native bee species, we haven’t even described them all yet. They’re solitary and not introduced to Australia and they’re most definitely in decline,” she said. Bees and other pollinators are threatened with extinction. A growing body of science implicates pesticides called neonicotinoids and glyphosate as key factors in their decline.

Neonicotinoids (aka neonics) are one of the most common pesticides used in agriculture and are also used extensively by home and garden centres. Unbeknownst to consumers, many “bee-friendly” garden plants have been pre-treated with these bee-killing pesticides. Exposure to neonics can kill bees directly and also makes them more susceptible to other impacts like pests, diseases, loss of habitat and a changing climate.Neonicotinoids make up about 30 per cent of the global pesticide market. Plants grown from neonicotinoid-treated seed have the pesticide in all their tissues, including the nectar and pollen.

Neonicotinoids are systemic pesticides. Often, they are used to coat seeds to protect them when they are planted in the ground. After the seed germinates, the pesticide spreads throughout the growing plant and guards it against nibbling insects. But the insecticide is also present in the nectar and pollen, meaning pollinators get dosed, too. Many studies have shown that the chemicals can affect the ability of honey bees to learn and forage, although industry scientists have disputed whether the experiments are realistic enough.”

Avoid products that contain Acetamidprid, Imidacloprid, Clothianidin, Thiamethodoxam. Here is the list of the most common Australian Neonicotinoids brand names.

The Task Force on Systemic Pesticides website has excellent resources including a PowerPoint that you can download that clearly explains Neonicotinoids. The Worldwide Integrated Assessment of the Impact of Systemic Pesticides on Biodiversity and Ecosystems (WIA) has made a synthesis of 1,121 published peer-reviewed studies spanning the last five years, including industry-sponsored ones. It is the single most comprehensive study of neonics ever undertaken, is peer reviewed, and published as open access so that the findings and the source material can be thoroughly examined by others.

2020 World Bee Day We-BEE-Nar with Dr Andrew Barron- Well worth watching as Dr Andrew Barron is an Australian neuroethologist at Macquarie University studying the neural mechanisms of natural animal behaviour. He is conducting research to improve honey bee health and welfare including how bees and bee colonies are impacted by pesticide and disease stressors, and how we might best intervene to help colonies under stress.

Friends of the Earth Australia: Bees and Pesticides: A search for bees on FoE’s Australian Pesticide Map, reveals that Fipronil has been behind more bee deaths. Fipronil is registered for use on a variety of crops such as Asparagus, Bananas, Brassicas, Cotton, Forestry Plantations, Ginger, Grapevines, Pastures/Sorghum, Potatoes, Sweet Potatoes, Mushroom, Sugarcane, Swede and Turnips. It is also registered for use as an ant (incl. Fire Ants) and termite killer and used on a variety of turf applications including golf courses.“THERE ARE NO REGULATIONS IN PLACE IN AUSTRALIA THAT REQUIRE BIOCIDE INFORMATION TO BE REPORTED AND THERE ARE NO GOVERNMENT OR PRIVATE BODIES WHO HAVE RESPONSIBILITY FOR MONITORING BIOCIDE APPLICATION.”

ACT FOR BEES ‘How to Grow a Bee Friendly Garden’ flyer

Natural Pest Management You Can Use in Your Garden THIS COSTA RICAN CITY HAS GRANTED BEES AND TREES CITIZENSHIP

The Mayor’s office made pollination a focal point for the development of Curridabat’s green spaces.

“The keystone concept in this new vision of urban development [is to consider] pollinators as the most efficient agents of prosperity,” the office states in a release. “Pollinators were the key,” Edgar Mora, the former mayor of Curridabat, told The Guardian. He has been credited with transforming the city into a haven for wildlife during his 12-year term as mayor. “Pollinators are the consultants of the natural world, supreme reproducers and they don’t charge for it,” he continued. “The plan to convert every street into a bio corridor and every neighborhood into an ecosystem required a relationship with them.”

CAN CITIES SAVE BEES?

How can urban habitats be made to serve pollinator conservation? An informative ’roundtable’ of researchers & ecologists world wide, including Caragh Threlfall (Uni of Melbourne)  focussing on how the story of the importance of pollinators can be told and supported. Dr Caragh Threlfall’s research is focussed on understanding the impact of urban form on biodiversity, measuring the services biodiversity provides across urban landscapes, and assessing the effectiveness of urban greening for biodiversity conservation. Caragh Threlfall is also involved in Clean Air and Urban Landscapes Hub (CAUL) an interdisciplinary team funded under the Australian Governments National Environmental Science Program which is focussed on researching air quality, urban ecology, urban planning, urban design, public health and green infrastructure in Australia.

Why Bee Friendly Cities are the Key to World Food Security.

If you start losing pollinators it affects not only the biodiversity in the landscape as they are pollinating not only our food, but the food for a wide range of birds and small mammals. Often the species in decline have very close associations with the local indigenous plants of the region and they co-evolved together. According to community ecologist Dr. Mick Hanley, “Biodiversity needs to be incorporated into urban planning in a much more strategic way than it has been done so far.” The  2016 study from Plymouth University found that cities can provide vital refuges for insect pollinators.

BEE Friendly cities include a number of European cities involved in BEE Week, Stroud UK , Toronto,and Shorewood USA. They have dramatically reduced pesticide use or banned neonicotinoid usage in public spaces including schools, parks and roadside plantings.  Here are Strategies to reduce pesticide use in your local electorate.

Bee City USA fosters ongoing dialogue in urban areas to raise awareness of the role pollinators play in our communities and what each of us can do to provide them with healthy habitat.
The Bee City USA program endorses a set of commitments, defined in a resolution, for creating sustainable habitats for pollinators, which are vital to feeding the planet.
​Incorporated cities, towns, counties and communities across America are invited to make these commitments and become certified as a Bee City USA affiliate.

Around the world there is a growing movement of towns and cities taking serious measures to reduce pesticide usage for the health of the pollinators, Water and people.

In 2009 the European Union Member States approved the Directive on Sustainable Use of Pesticides (SUDP) with a growing number of towns going pesticides-free. We can learn from the examples of Belgium, Brussels, Denmark, Flanders, France, Germany, Luxembourg, the Netherlands and Wallonia who are banning the use of pesticides in public places! Great Policy directives and ways to initiate this in your town.

Beyond Pesticides works with allies in protecting public health and the environment to lead the transition to a world free of toxic pesticides.

For the Love of Bees New Zealand

Can you imagine New Zealand becoming a giant pollinator sanctuary?

Would you like to co-create a future that is not only sustainable, but regenerative?

We welcome you to join our nationwide collaboration!

Read on to see how bees can be the entry point to regenerating your commons as a community.

A City Bee Collaboration in Auckland NZ , “We inspire collaborative participation in the regeneration of the planet, sparked by our shared love for bees”. Inspired by sustainability and wellness, the OMG will be a living example of the role of urban farming in achieving a sustainable and regenerative food system for Auckland. We wish to inspire local residents, businesses and communities in the uptown neighbourhood to learn new concepts and gain practical skills, on how to grow nutrient dense food by using organic and biodynamic principles, in an open access teaching hub. 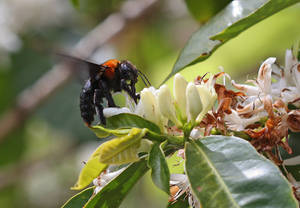 Watch out for pollinators!

Pollinators vital to our food supply under threat